When it comes to colours, I like a palate that could be described as ‘bright and bold’ or, if you were feeling less complimentary, lurid. Typically, I use acid dyes for silk and wool, partly out of habit, partly because I don’t generally spin plant fibres, so haven’t needed to dye them. However, I’ve had a few people now say that if you want the boldest, brightest colours for silks, then it’s Procion MX dyes you need to use.

Procion MX dyes are a type of fibre reactive dye and as they are out of patent, a lot of different manufacturers now make them. There are a few kinds of Procion dyes, but the MX part of the name refers to the cold reactive dyes that are ideal for dyeing silks, cottons and even wood. Probably the biggest distinction between them and acid dyes is that with Procion MX dyes, you don’t need to heat the dye to get it to fix. You also generally dye at alkaline pHs with them too. (It is possible to use them at acidic pHs on silk but that’s not what I’ll be worrying about here.)

New dyes means new stock solutions, so I started by making up about 5 % dye solutions in a range of different colours. One advantage of acid dyes is they keep very well so you can make up your stock solutions and keep them hanging around in a cupboard until you next need them. Procion MX dyes are not so stable; if you don’t add any acid/alkaline to them, the solutions will last about a week but as soon as you add the soda ash, the dyes start to react much more quickly and will only last a few hours.

I was lucky enough to have a glamorous assistant to help with my dyeing which resulted in me being ridiculously overambitious about the weight of fibre I was trying to dye. I’ve whinged before about how difficult it is to even dye 100 g of fibre in my tiny kitchen, so I’m not quite sure why I thought 250 g was going to be a good idea. However, if you can rope a friend into the dyeing process, preferably one who doesn’t mind foul language and can follow orders to a high degree of precision, it does speed things up slightly. Bonus points if they also make very good tea.

I soaked the silk for about two hours in water with soda ash before applying the dyes. One thing I did find, possibly as a result of having made such concentrated stocks, is that all the purple ones, Raspberry MX-B, Deep Purple MX-R and Vivid Violet MX-3B, look nearly black and are very difficult to tell apart. However, they all dry distinctly different colours.

I wrapped the top in cling film and tossed it in the saucepan I usually use for steaming pieces. I didn’t add any urea but as soda ash is hygroscopic anyway, I found the top was still nicely damp when I unwrapped it twenty hours later. One interesting thing we noticed was, if you add a lot of soda ash powder to the silk, it’s an impressively exothermic reaction, with a lot of heat given out. Probably not enough to burn yourself but something I wasn’t quite expecting.

Then began the world’s most painful rinsing process. With acid dyes, I tend to get some run-off of the colours that don’t fix as well, like Magenta and Turquoise but this was a whole new test of endurance. Every single skein seemed to be haemorrhaging dye and whenever I tried to re-rinse them there seemed to be more dye to come out. I’m not sure if I’d been a little overenthusiastic about how much dye I had used (which I will blame my assistant for) or whether Procion MX dyes don’t fix as well. I wasn’t seeing much change in the colour of the silk though, so I’m not entirely convinced it was a fixing issue. 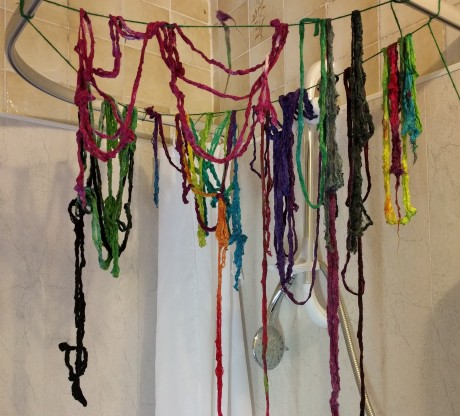 Some people avoid dyeing silk with soda ash because the alkaline pHs can, allegedly, cause the silk to lose its lustre and changes the texture somewhat. The information on the Internet as to when and why this happens is somewhat unsatisfying, with some people saying that soda ash shouldn’t be kept on silk for more than 12 hours. Others suggest that the softness of the silk can be restored by soaking it in vinegar. Deb Menz, in her wonderful book ‘Color in Spinning’, recommends batching the dyes for 24-48 hours for the most intense colours, which is longer than anyone else recommends and she makes no mention of potentially ruining your fibre.

Anecdotally, some of the pieces that came out felt indistinguishable from acid dyed silk and in this quick photo comparison, I’m not sure I’d say that one looks remarkably different in terms of shine than the other. Others did feel a little ‘harder’ and had a fluffier halo to them but nothing too dramatic.

What was obvious though was how amazingly good the colours looked. They were bright, they were bold and made for an absolutely fabulous pile of fibre that I have no idea what I’m going with just yet. I’ve had varied results trying to mix colours in the past but I’d found it relatively easy to do gradients with these dyes as well. 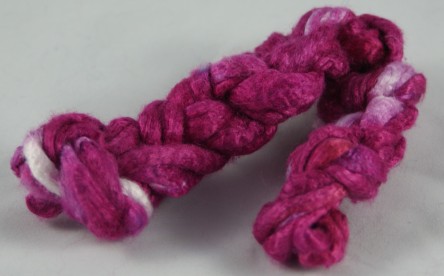 There was a surprising amount of dye migration. This skein was dyed using Raspberry MX-B exclusively and doing in stripes, with undyed patches in between. However, there are very few dye free spots in the finished piece. The dyes had also penetrated right through the entire top.

There are a few strange looking bits and pieces there, where the top had broken into smaller bits and we’d got a little impatient with the whole process but overall, I am very happy with how most of these have come out. I find purples a nuisance to mix, so having all that done for me was great. 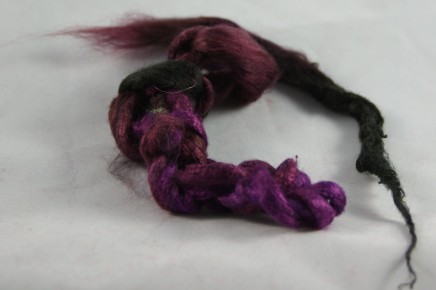 I’m not entirely sure if I’m a Procion convert for silk just yet. I do prefer having a much bigger colour range available and in terms of colour intensity and penetration of the dye through the fibre, all of this batch was a huge success. However, part of why silk appeals to me is the lustre, so I want to do a bit more testing to see whether the soda ash is damaging the silk at all and if so, how easy is it to damage the silk. I’d also love to hear about any of your experiences using Procion MX dyes.