What a better way to see in the new year than with a new project? One of the very nice surprises I found at the Harrogate Knitting and Stitching show was a rather cheerful canvaswork design by Sue Hawkins I’d first seen on the cover of Issue 98 of the Embroiderer’s Guild Stitch Magazine had been on project wishlist ever since. I am glad to say that finding the kit was definitely a small piece of serendipity!

If you’re after a copy of Stitch magazine, which I would say along with Inspirations, is one of the best embroidery magazines, you can subscribe here. For back issues from 2017 you can buy digital copies here but if you want something a bit earlier then Ebay may turn out to be your best friend. Unfortunately the digital subscription does require an annoying app, rather than just providing pdfs. I assume this is an ‘anti-piracy’ measure (which doesn’t actually work as the lowest tech way of doing this would just be to screenshot everything and make your own copy) and just makes it more irritating for the legitimate end user. This is one thing I really like Interweave for, their pricing may be a bit irritating with their constant endless sales, but at least all their books and magazines (to the best of my knowledge) are just pdf downloads so they’re easy to deal with and you’re not at the mercy of some poorly coded app that may well end up unsupported with future updates.

I’ve mentioned in a few recent blogposts about feeling a bit blocked with various projects. The Goldwork Monogram is going okay as it’s mostly mindless prep work, but I expect Venus is going to get thrown out of a window in a fit of rage at some point and the lighting in my apartment is rubbish for silk shading or any fine work in the evenings. Before the Christmas break, I was effectively living at work without the time or the energy to really feel enthused about tackling anything too complicated.

Even when I’m feeling too mentally dead for my more complex pieces, I still find crafting can be refreshing but it can be even more intimidating to just get down on with working on something. I had the lovely, colourful canvaskit lying in wait… but a long, long time ago, I used to do a lot of cross stitch. But one fateful day, I decided to start working on a very beautiful design of the Poppy Fairy, that was also rather sizeable. I stitched, and I stitched, and I stitched, but no matter how much I stitched, the stupid piece has remained unfinished for a record 11 years and counting and left me with a lasting phobia of the colour red… Since then I’ve been a little wary of trying any counted stitch techniques.

I decided to be brave though, and dig in to my wonderful Sue Hawkin’s kit, where I was greeted with the most beautiful collection of boisterously coloured threads. The great thing about trying a new technique are all the amazing beginner questions you suddenly have. How do you start a thread? How do you finish it? Luckily, Sue Hawkins included a helpful little guide, where she splits the thread and creates a loop to run the needle through, though this isn’t suitable space dyed threads. The Spruce Crafts has some great canvas/needlepoint guides for some of my more stupid questions, and there is some good information at the Sewing Directory and the Needle Point Teacher. Sarah Homfray, another RSN graduate, has some awesome videos that I found very helpful.

I have to admit I am not quite sure about the technical definition of the difference between needlepoint and canvaswork, although Sue Hawkins describes her stuff as counted canvaswork so I will believe her on this! What she doesn’t say though, if quite how wonderfully delightful her kits are to stitch.

I had a bit of a fail to begin with when I started the design on entirely the wrong bit of the canvas… The worst bit was I had even read the instructions carefully and measured everything before doing this, but after that it was relatively smooth sailing from there. I had one silly moment where I put the satin stitch on in the wrong angle and a few general ‘should have thought before I started stitching’ moments but nothing too terminal.

I did find myself obsessing a bit on whether to try and get the space dyed thread colour changes to line up neatly… There’s a really awesome photograph of all the different columns partly stitched in the stitch guide that I looked too for a bit of inspiration, and realised that many of the colour changes there were ‘random’ so just decided to relax and get on with it!

Working with the 6-stranded floss reminds me a little of working with the Japanese flat silks and posed a few challenges to keep it all smooth and flat. I was learning a lot of stitches along the way but this kit is just a wonderful sweetbox of colour and fun. The printed pattern is a good size and clear, with good, relatively thorough instructions throughout the kit. It’s not a complete spoonfeeding, for beginner kit, you’ll need to be family with what tent stitches, satin stitches etc. are, but despite being new to canvaswork, I’ve not felt too frustrated with lack of guidance so far.

I love variegated threads and seeing how things just end up working out. As the threads are precut into relatively long lengths, unless you’re working hard to ensure the colour changes ‘match up’ between threads, you end up starting at another random point, which all adds to the fun. I absolutely love the braided effect from the long-legged/long-armed/elongated/whatever you want to call it cross stitch and even the small parts of tent stitch that make the background to the hearts has been a lot of fun to work. 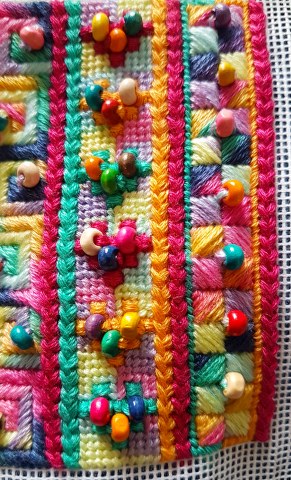 Simple and striking is how I’d describe the design and I love how this is a project that just seems to be flowing along, with only a few snags (mostly of the floss on the edge of the canvas which makes a right mess!) along the way. This has been a perfect little Christmas present to myself and probably the best introduction to canvaswork I could have had. I’m looking forward to getting the first pattern repeat (which is five differently designed stripes) finished, enjoying the whole things over again, and then seeing what it looks like assembled as the kit makes a humbug-shaped pincushion. At the moment, I’m not sure I could bring myself to use this as a pincushion, and I’m not sure how well the six-strand floss would survive being stabbed repeatedly, but maybe it will have frustrated me sufficiently by the end that it will end up feeling like a good idea!