Hopefully last week’s post about the various weaving workshops and artisans around Lyon set the scene of some of the wonderful textile past and present to be found here. If that wasn’t enough to tempt you, this week I present Lyon’s fabulous Musée des Tissus, the ‘Museum of Textiles’.

Located in a stunning series of 18th century hôtel particuliers, which translates not-literally as ‘incredibly fancy elaborate buildings’, the museum site is home to two separate museums, the textile museum and the ‘Musée des Arts décoratifs’ (museum of decorative arts). Both are fantastic museums with collections to lose yourself in and enjoy the very finest of predominantly French craftmanship. 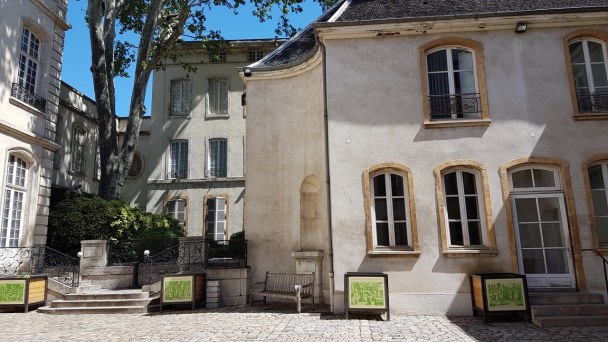 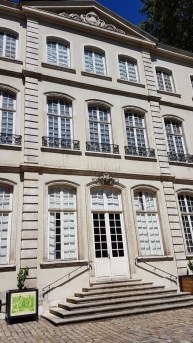 Even though the museum doesn’t have a huge footprint, the density of exhibitions means it’s easy to spend three or so hours going around, particularly if you want to spend time taking in some of the fantastic details. The documentation is really fantastic, most of the exhibits are listed with dates and creators as well as good background information about the item. It’s a nice touch as the composition and materials of most of the textile pieces are listed alongside the techniques used to create it.

The first few room contain a lot of information on Lyon and notable characters from its history. There’s a particularly impressive piece produced by Maison Ogier in 1889 with the coat of arms of Lyon that looks like a painting, until you get sufficiently close that you can actually see that it is in fact fabric and an example of ‘velours au sabre’. I’m not really sure what the correct translation of this technique is, but it’s a way of shaving down velvet to create beautiful patterns using the remained raised areas. There’s a fascinating video of how it’s done here. This piece was created to be presented at the Exposition Universelle at Paris in 1889 – this is an event you’ll see mentioned multiple times in the museum. These were infrequent international events held in Paris as a way of showcase scientific and technological advancements and display ancient curiosities. It was an excellent way for skilled craftspeople to show off their talents too.

Another remarkable piece is the ‘Hommage à Léon Talabot’. Again, this is such a fabulous, intricate piece of work that it looks more like a painting than fabric, but what had Léon Talabot done to deserve such an honour given the countless hours this must have taken to create? Léon Talabot was a famous engineer and one his most notable achievements being the development of a standardised way of drying silk. As silk was sold by weight at the time, there was no consistent drying process and this was exploited by some less scrupulous people. This is why the Chamber of Commerce wanted to find a more controlled approach, which Talabot developed and is actually still in use today. Here is a great article on the history of his ‘drying machine’ and how it works.

I really like how much of the general historical context the museum tries to give to each of the items. If you don’t speak French, and some of the language is quite complicated, there aren’t many translated descriptions in the first half. For the more modern exhibits later, most things are in multiple languages. However, what you can always do is use either Google Translates live image translate or take a photo to sit down and peruse it at your own leisure. Photographs are fine as long as they are without flash, and you’ll see quite a few what I suspect are art or fashion students taking photos of the fabrics for their own work or inspiration.

Alongside the dedicated fabrics, there is one real painting that is actually made from paint, and another portrait that, once again, is so finely woven it looks like paint. The real painting is a portrait of Jean Revel by Donat Nonnotte, one of the major figures in the ‘Fabrique lyonnaise’. He was the son of a painter himself and invented a method of separating colours called ‘points rentrés’ so create subtle shading and bring designs to life on the fabric. The Victoria and Albert Museum, among others, describe him as ‘the Raphael of silk design’ and when you see the incredible complexities of the designs of his textiles with the beauty of the flowers and foliage you can understand why.

The other figured honoured in fabric is Philipe de Lasalle, another eminent figure in the Fabrique lyonnaise. This piece was also presented in the Exposition universelle de Paris but in 1855. His work became very popular with the Russian empress Catherine the Great and he made a woven portrait of her that was praised for its likeness. It’s also impossible not to enjoy his scenes of pheasants and nature.

One piece I rather enjoyed was a celebration of the humble creature without whom the entire museum and Lyon’s prosperity and trade would not exist, the silkworm. This piece is by Charles-Simon Colliot, between 1750 and 1760 – I’m not sure if that’s an estimate on the museum’s part or if the piece really took 10 years to complete! If you look closely you can see the huge eggs, some well hidden caterpillars and then the glorious Bombyx mori, producer of the larvae that spin cocoons of the finest mulberry silks. It probably doesn’t bear thinking about quite how many silk worms went into making this one piece in their honour, making it perhaps a strange, yet beautiful tribute. 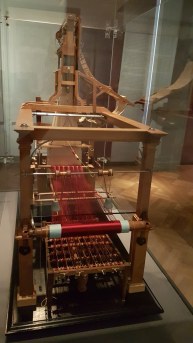 The museum has a few looms on display, some small model pieces and other ‘real sized’ items to show off the Jacquard-style looms and explain their history and significance to the city. You can read a bit more about the mechanisation and its impact on the textile industry in last week’s post on my visit to the silk workshops of Lyon. The looms do look rather more peaceful when they’re not in action and creating a dreadful racket! This cute miniature loom was built by François Tranchat for Auguste Gautlier’s collection – apparently he liked to collect working miniature machines of all the tools for producing silk in Lyon. A rather charming hobby! 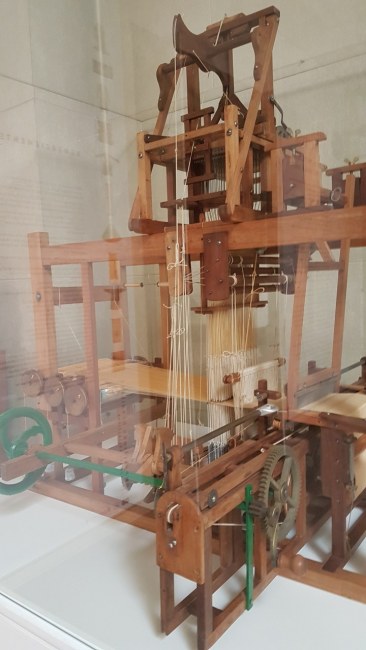 The museum identifies several key figures as part of the Fabrique lyonnaise, the previous mentioned Jean Revel and Philippe de Lasalle, the mechanic Jacques Vaucanson, as key to the weaving process as the designers but who are often forgotten in the history books, Jean-François Bony, Joseph-Marie Jacquard and Michel-Marie Carquillant. There is a great emphasis how Lyon’s success in this period was achieved by having the right technical skills, for creation and maintenance of the looms and the weaving process itself, with the ambitious artistry of many of the fabric designers, that put Lyon are the forefront of fabric design and why the textiles were so sought after in this period. One of Lyon’s enduring design legacies is Hermès and the creation of the timeless classic of the silk square scarf. There’s a few early Hermès pieces at the museum to enjoy as well and it’s interesting to see how their designs have evolved over the years. 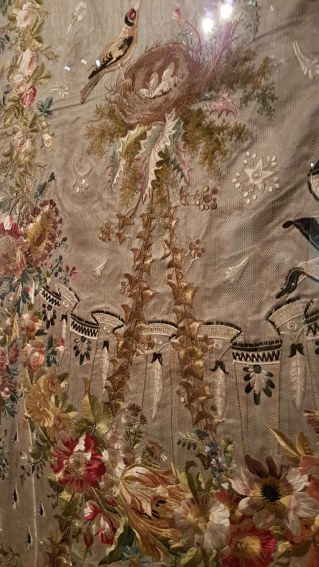 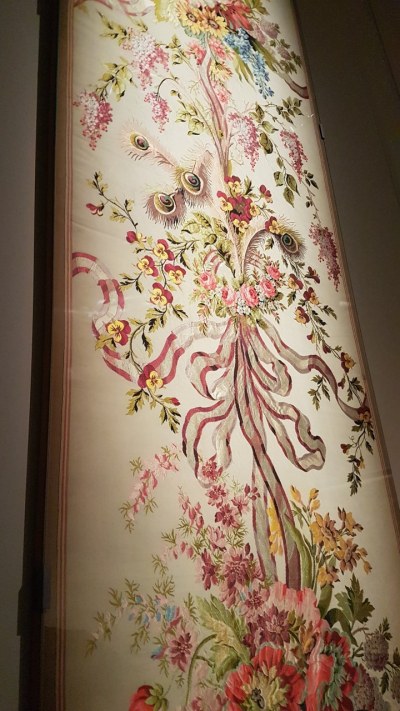 You’ll see a lot of oriental influences, particularly in the flora and fauna of many of the textiles, a reflection of what was fashionable and considered good taste at the time. What will never fail to amaze though with each piece is the quality of the craftsmanship and the artistry. Maybe when you weave yourself you can appreciate even more the complexity and the fineness of the threads that must have been used but I have to admit looking at many of these I would find it very difficult to know where to start to recreate them! I think in many situations it looks like it would be easier to just hand embroider such fabrics. 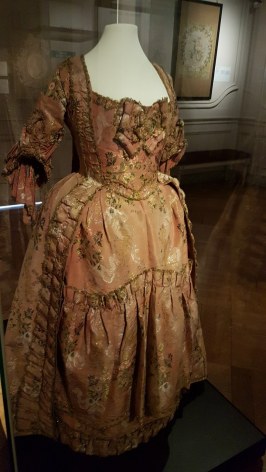 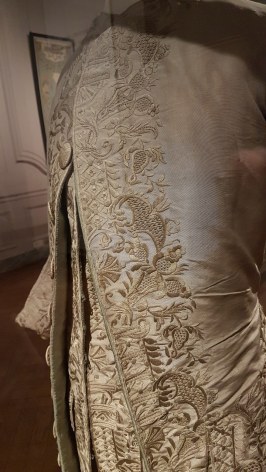 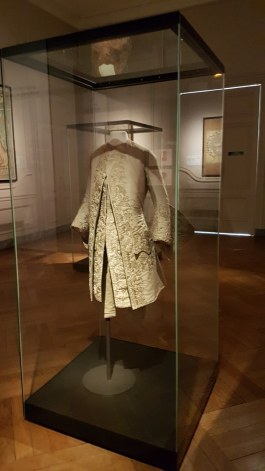 Most of the fabrics are displayed as wall hangings but there are quite a few items of clothing with some phenomenal detailing. This is an early 19th century silk dress from a beautifully woven silk but I think in all honesty I find the intricate details and raised textures on the jacket far more striking. I think only in this museum could a dress like that look a little dowdy! 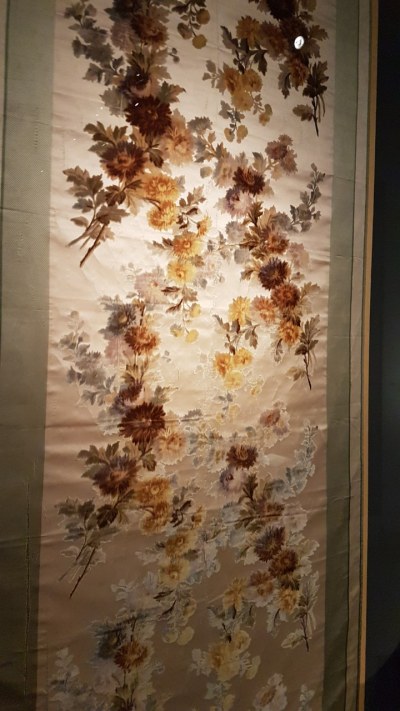 As well as the silk weaving, there are some ginormous woollen tapestries depicting various scenes of historical or biblical note involving lots of decapitations and spearing. I know tapestries used to be an early form of insulation for your huge draughty castle but the scale and the complexity of the scenes depicted make them seem rather extravagant for that purpose. 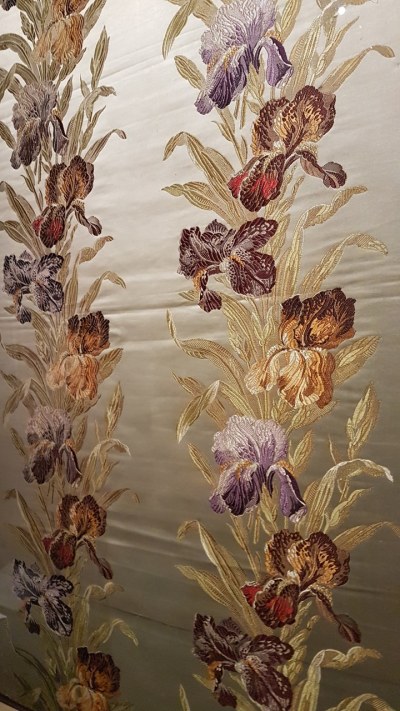 Once you’ll been through walls of enchanting silk fabrics, the museum takes a rather different tone with themed exhibitions of various ages. The section didn’t start on the best note, with a rather original exhibition on ‘naked women’ (I think it might even have been titled that) but did improve with other exhibits on ‘Gold’, which was as blingtastic as you might expect, and another on ‘Dragons’, with some fabulous traditional Chinese costumes. One of the highlights for me was an Indian or Iranian 18th century Kalamkari table cover or wall hanging. A beautiful piece of fabric but an even more incredible piece of design. I love Arabic calligraphy very much so the partial silk ceremonial banner from the 18th century also very much caught my eye. 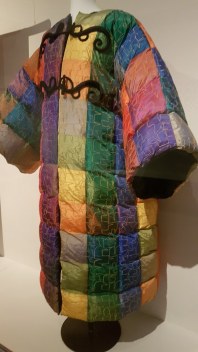 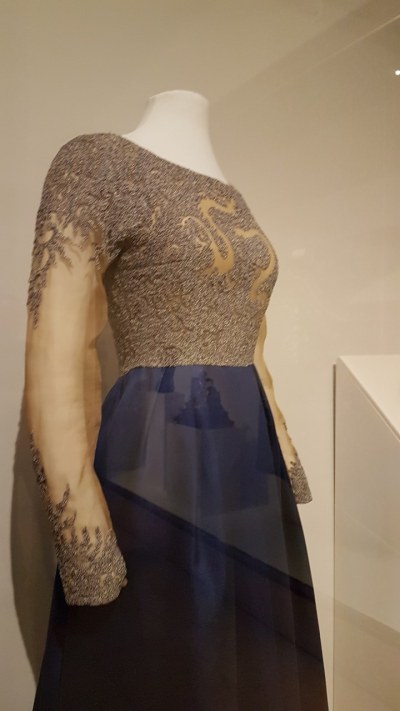 On a more traditional note to end with, what about this dress fabric called ‘Papillons de fleurs’ by Maison Schulz et Béraud? This was a piece for the Exposition universelle in 1867 and it’s utterly charming. You have to press your nose up very close to get the full detail of the flowers, which is a whole other world of craftsmanship. Fabrique lyonnaise at its best. 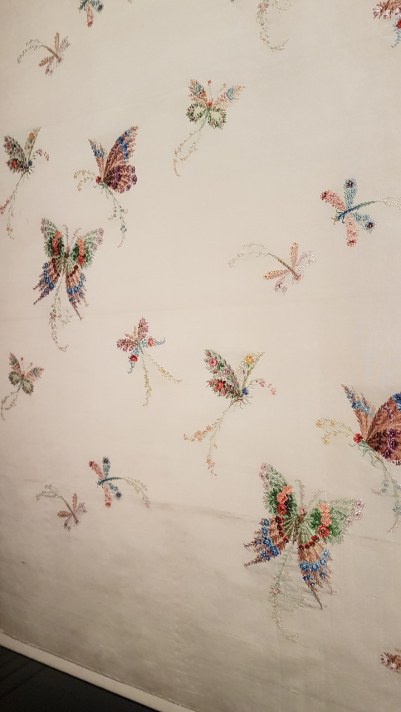 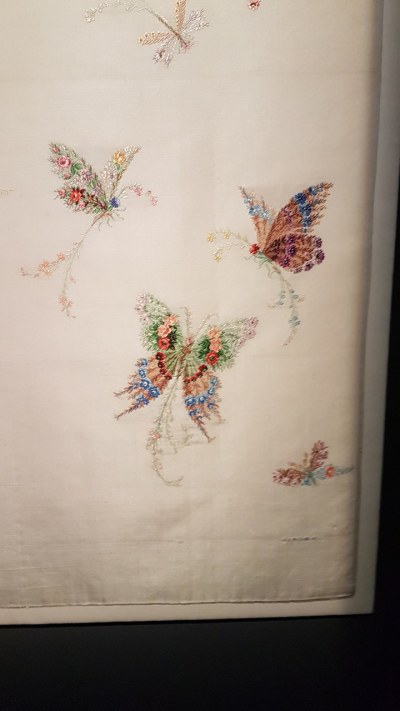 As you might have guessed, I had a fabulous time at the museum and would highly recommend it for anyone passing through. Being able to read French is definitely a bonus for taking advantage of the great documentation but I don’t think anything would impede many of the exhibits being as mesmerising as they are. In terms of textile quality, there’s few places that could hold a candle to the collection here and for fabric lovers, it’s very unusual to see so much focus on fabric, rather than fancier items. It’s a little bit the same philosophy as the St Gallen Textile Museum, as opposed to the Victoria and Albert, which has a phenomenal collection but is more geared towards clothes and applications. If you’re in Lyon, go! If you’re not in Lyon, find a way to be and go!

If you want some better quality photos of some of the exhibits, check out the collection here by Jim Steinhart!