…This hat really is proving to be quite the disaster, isn’t it? To start today’s post, I’d really like to thank yarnmama10 for very kindly taking the time to point out on my last post that what I had claimed (and thought) was stockinette stitch on my hat was actually garter… Whoops. I am very, very grateful for someone pointing this out to me before I picked up one of those ‘lifelong mistakes’. In my excitement to knit on with the project and rushing to remind myself the pattern for stockinette I had forgotten to pause, breathe, and think about what I was trying to do. Whoops indeed. Here is a note to myself with a helpful guide on the differences between knitting flat and in the round.

I was then faced with a minor dilemma, carry on as if this was a design choice and not a mistake and risk falling foul of the increased yarn consumption, or frog for the umpteenth time and do better next time. Even surprising myself, I opted for the latter. Maybe it is because this project has been frogged such an absurd number of times that I have lost any capacity to be upset by it anymore and it felt more like an opportunity to sort out some stitch quality issues and small mistakes as well as extending the rib section which I had now decided was too short. 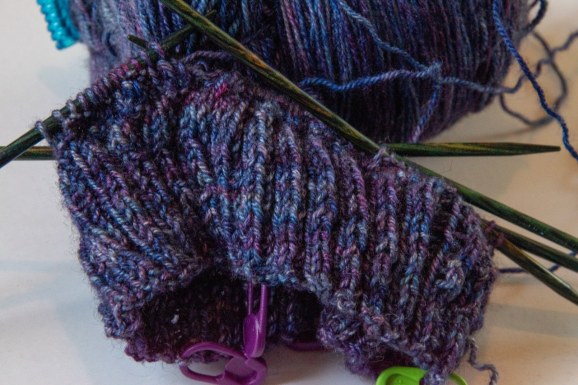 After an idiotic false start where I tried to knit a checkerboard pattern rather than extending the rib, and maybe twisting a few stitches getting them back on the needles, everything went very smoothly and my stockinette is now real stockinette. I thought I had preferred the texture of the garter stitch but the stockinette shows off this gorgeous yarn much better.

A few things have been really nice about the restart. It’s clear how much my knitting speed has improved as has my tension control. Dropped stitches are now greeting with a shrug, a crochet hook, and repaired in a few seconds rather than being a source of panic. It is very nice. Knitting (for this project at least) has finally become mindless. Probably just as well given that the deluge of tedious, pointless video conferencing meetings doesn’t seem to have disappeared…

For now I can just enjoy the simplicity of the knitting (although again, why does stockinette seem to grow at such a snail-like pace compared to rib, even though it should be more efficient?) I have been a real ball of frustration this week. If I was some yarn, I’d be a skein that someone forgot to put the ties on, sloshed around a dye bath and turned into an unholy mess that would be unthinkable to sort out. I think the frustration comes from a lot of different things at the moment, though perhaps not from knitting for once, but if anyone wants me in the meantime I will have stuck my head in my fibre basket until I feel better. Silk and merino is much, much better than sand. I’ll be making my hat too, one tiny little knit stitch at a time.