Murdering skeins is a bit of a hobby of mine. I’m not sure where I developed quite such an aptitude for transforming beautiful bundles of fibre into Eldritch horrors of the knitted world but it’s about the least useful skill a crafter can have.

Sometimes it has been clumsiness or underestimating quite what a disastrous effect travelling can have on your supplies. Sometimes it has been my notorious impatience with wanting to dive into a new project. Other times, I swear I simply turn my back and when I turn around, I’m greeted with a sight that invokes the more colourful regions of the English language.

Yes, that is a skein of Handmaiden Sea Silk. Yes, that is the start of a project, the Holden shawl to be exact. Yes, I am aware that is an inexcusable state for a bundle of fibre to be in. It’s a pretty heart breaking sight but this is a good lesson in why, if you’ve ever going to be carrying a skein around, make sure the ties are very secure. Even better, given how skeins are such an entropically unstable form of yarn, get it into a cake or ball as soon as you can.

I’ve been dyeing a lot of skeins for weaving recently and was keen to avoid a repeat of the aforementioned disaster and to find a better form of storing them. Inspiration struck when I was visiting the wonderful Handweaver’s Studio and Gallery when I realised I had the perfect excuse to buy a bobbin winder. Bobbins will happily sit in boxes without attempting to merge with each other, easy to label and easy to unwind again as required. 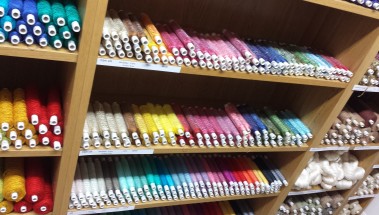 Of course, the old saying of ‘if it sounds too good to be true, it probably is’ decided to strike. I had envisioned myself sat there, tidying up the stash by making these bobbins in a beautiful array of colours, revelling in my handywork. What I instead ended up with, was something that looked a bit like this…

I had naïvely thought that the back of an office chair would make a suitable substitute for an umbrella swift. I was very, very wrong. The skein had managed to slip all over the place while I was trying to unwind it, causing a great deal of aggravation and snagging in the process, before finally making a graceful leap into the air, to descend around as much of the bobbin winder, nearby furniture and anything else it could ensnare in the process.

As a testament to my personal growth as a crafter, I didn’t immediately leap into the fray, snatching at threads to try and rectify the mess. Instead, I went to the kettle, poured up a cup of tea and wept for the demise of that particular skein. I made a few half-hearted attempts at unpicking it but that has now become another project on the ‘work in progress’ list.

Keen to avoid the same mistake, I tried using my warping board to hold the skein in place but, although this didn’t quite end in mortal failure for the skein, it was still very time consuming and far from therapeutic.

A lot of people prefer DIY solutions to various crafting utensils, such as using an electric drill as a bobbin winder or coming up with inventive ways to use household furniture. This was one situation I was just very happy to admit defeat, shell out the cash for an umbrella swift, and call it an investment in my future blood pressure readings.

There’s a lot of gadgets in crafting you don’t really need. The problem is, while you can completely do without ball or bobbin winders, you need the patience for process taking much longer than it otherwise would. While we’re all supposed to be very zen about ‘enjoying the process’, I take zero issue with using tools to make the unpleasant bits of the job easier. Plus, less time making bobbins means more time dyeing or weaving, which is really the point of the exercise.

Another advantage of an umbrella swift is that, with a bit of elbow grease, it’s really easy to wind up skeins from cones on. Just tape the end of the yarn on (washi tape works really well as it doesn’t damage the end) and whizz it around as fast as it will go without creating and knot disasters. I just sat the cone on my spinning wheel and it worked very well. In terms of working out how long the skeins are, it’s probably best just to weigh them rather than trying to count how many times the swift has been around. You can get equipment called skeiners intended for this purpose but for some reason they are at least ten times the price of swifts.

As I’d picked up a very cheap swift, I was a little nervous about trying it on skeins of anything precious. However, it had done well in the test runs and I had recently acquired two incredibly lovely laceweight yarns from Eleanor over at Solstice Yarns. Her dyeing is both striking and unusual and both skeins feel and smell fantastic.

Haunted by memories of the Handmaiden Sea Silk, I thought I’d have a very cautious go at unwinding these using my new bit of kit, which went significantly better than my first attempt with the bobbin winder. One of the cakes isn’t wonderful as there was a bit of slipping as I wound it, but both are perfectly functional and I’ve just got the incredibly difficult job of deciding on a pattern to do them both justice. I’m thinking some kind of beaded shawl for the darker colourway but I’m not sure about the other just yet… 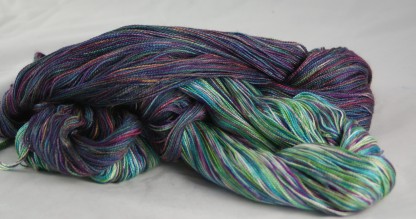 If you’ve had some kind of horrible yarn accident and there’s an abomination lurking in your stash, don’t despair. When it happens, punch something or someone if you have to, just don’t start pulling hard in random directions and the golden rule of untangling is to stay well away from the scissors. They don’t make anything better.

For truly desperate times, there is a group of saintly souls on Ravelry who specialise in rescuing yarns from the abyss. You send off your mess and it comes back in a form that’s useful as something other than a cautionary tale. I truly have no idea what graces these people with their divine patience but I am glad that someone out there genuinely enjoys the puzzle that is a tangled skein!