Another day at the Royal School of Needlework for me, to do battle with the beast that is my Jacobean crewelwork. 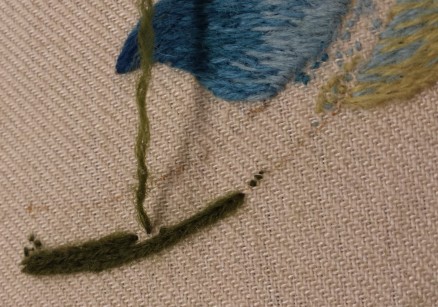 At the end of the last class, I had rather a lot of homework that mostly involved meters of raised stem band. While I had managed to get some of it done, there was still rather a lot to go and, as tends to happen with these things, life somewhat got in the way.

I wasn’t sure whether it was going to be worth going to another class yet or not, as one of the issues with progressing in embroidery is that, in areas with overlapping shapes, they have to be built up background first to give the right sense of perspective. Fortunately there are only a few areas of my design where I have closely packed shapes but, ideally, I want to spend class time learning new stitches rather than filling in areas with techniques I know how to do.

However, as it was going to be a while before I could make another class, I decided to head along anyway, somewhat expecting a telling off for not making enough progress as I should have done but am very glad I did so. 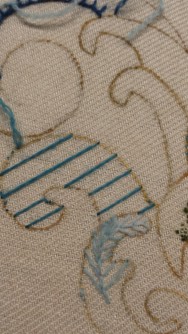 I get a lot of questions about what it’s like trying to do the Certificate course alongside working, other hobbies, life etc. The honest answer is it’s not always easy, I’ve had a lot of fantastic professional opportunities come up recently that it would have been stupid not to take up but it does mean things are even more hectic.

The great thing about the course though is that it is designed with that in mind. You have about 5 years to complete (and I believe extensions are possible) to complete from starting.  Also, maybe I’m just particularly lucky with my tutors but, rather than getting a telling off, I just got encouraged to keep going and do what I can.

It is sometimes a bit hard not to be jealous of the retired stitchers but I did end up having a very productive day to keep me on track, despite a few setbacks. I feel like I’m constantly moaning about Appletons crewel wool, but some of the jumps in the colourways did make getting the patch of long and short stitch rather challenging to finish and trying to blend from blue to green was a nightmarish challenge I’m not sure I’ve succeeded at.

The accent orange colour has been nicknamed ‘Danger Orange’ because it does a beautiful job of shedding fibres all over the rest of the piece. I’ve only stitched two sections of orange but the fibres are everywhere… I think all my linen will have disappeared to sticky tape soon.

I love laid work. I’m sure getting grids right is supposed to be frustrating, and it definitely is when something is one hole of the fabric off, but it’s so satisfying when it works. This section here is going to have a filled checkerboard effect, so I’m just going to need to work the holding stitches and then I can go a bit crazy with the colours. 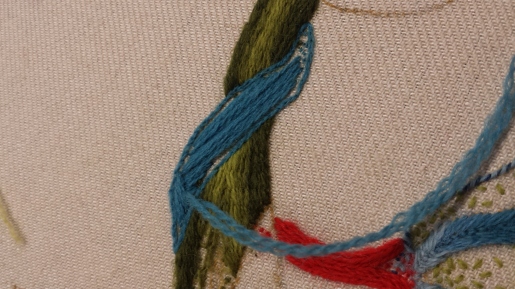 The raised stem band has a nice padded look to it, which meant the padded satin areas had to really live up to their name and be very well padded. Each part is going to need about three layers of padding which makes for some hard work on the hands when the stitched areas start to get denser. One key thing to remember with padded satin is to not ‘pad the back’ as well. You want to start the next stitch next to where the previous one finished so you don’t end up with excess bulk that is a nightmare for mounting.

Getting some more blue on the piece is helping alleviate my worries that this was going to end up looking more funereal than comical in terms of the colour scheme. The really awful bit of raised stem band where the trunk splits at the top is done now so it should be relatively straightforward from there. I wanted to keep the smooth curve but have the colour pattern split at the top so it’d look a bit more interesting. I’ve learnt not to be afraid of ‘floating’ raised stem band rows, or to keep them short just while working particular areas, just make sure to stagger the ends so you don’t end up with any clear lines in the stitching.

I started the class still being somewhat convinced that I should have just thrown tea over my work or ‘slipped’ with the embroider scissors but it’s starting to grow on me again now. The stitching in the central motif is much more interesting so it’s the final push on the godforsaken raised stem band and it should be onwards and upwards from there!