I am not the most confident knitter in the world. When I see fellow bloggers like bonnyknits and Quite A Yarn blazing through project after project, I do have to wonder what magic it is that blesses their needles. It’s probably far less glamorous and down to years of practice, experience and learning but I am always amazed with tales of grandmothers who can whip up a pair of socks in a day.

I am even more amazed that this is even possible after my experience with what should probably become known as the ‘Hat of Despair’. I have a bad habit of biting off more than I can chew when choosing project difficulty for new techniques – I should probably be banned from Ravelry from falling into the ‘that looks cool!’ trap as that, along with my love of anything lacey, usually makes for projects way beyond my skill level.

In a moment of clarity and self-reflection, I therefore though I should start a simple, nice knitting project that I could take travelling with me and idly knit and purl away without too much concentration and that is where the problems began.

I have been working on Boho Knits ‘Slouchy Sockhead Hat’ for what feels like forever. I am very comfortable with works in progress spanning timeframes of years (in fact I’d probably be completely at ease with it if it wasn’t my grandmother’s occasional needling about ‘what’s going on with project xyz?’ and reminding me of their existence). However, this one has been a serious source of irritation.

It’s not a hard pattern per say (in fact it’s probably the easiest I’ve ever attempted) but this one has now been frogged and re-cast on … I think about seven times. Seven inglorious, frustrating times of counting 144 godforsaken stitches to cast on. I feel really bad. The wool is beautiful (this is the standard yak base (15 % yak, 60 % wool, 20 % silk) in the Marled Beauty colourway from Kieler Wolle – you can see some more photos of it here) and has withstood repeated frogging murder attempts like an absolute champion. Perhaps surprisingly with the yak content it hasn’t got too fluffy and hairy.

The pattern is reasonably written and eminently sensible. So what is the problem? I keep losing stitches. They just seem to catapult from the needles with the joy of spring lambs or surreptitiously sneak off while the project is in my bag. It has been driving me completely batty. I hate counting at the best of times (including the stitch markers did help somewhat) but repeated counting and despair at ‘where did this stitch go’ are not ideal. 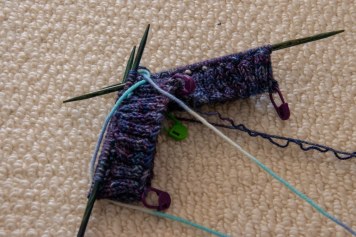 A lot of the problem has been my not so careful project transportation. A public service announcement… if it’s on double pointed needles, get yourself some needle stops or binders or whatever. Even if you knit with an equivalent tension of a boa constrictor squeezing its prey to death, the stitches will somehow escape and disappear into the beautiful inky depths of your wool.

Given that travelling is now a verb of the past for the time being, I tried to rescue my original work with a lifeline…. Then just ripped it out and started again for the last time. After a painful few rows getting started in the round, I found myself pick up a bit of speed and rhythm and doing something that felt a lot like knitting.

Things have been much better since then and maybe this little project will finally make it past more than a few centimetres of progress this time… Annoying as it was, I just didn’t want to give up on such beautiful wool and I can be incredibly obstinate about things as and when required. I have never felt like a natural knitter. When I finally managed to make some stitches when I learnt, my grandmother did realise I was somehow purling and knitting ‘backwards’ in some weird way (probably couldn’t manage that now if I tried) and I am just so awkward with the motions. At least now though there is the glimmer of enjoyment in this project and perhaps the chance for some mindless knitting.

For all my knitting heroes out there, how do you get nice joins in the round and avoid the ‘stripy’ parts of loose tension when knitting on multiple needles where they join? I am shifting my stitches 4 to the left every so often.