Kiel is a charming city in the north of Germany, only about an hour and half from Denmark, with plenty of beautiful waterfronts. Maybe inspired by the slightly… brisk weather during the winter though, it also seems to be home to a surprising amount of spinning, weaving and wooly goodness.

If you walk through the city centre, you’ll come across no end of delightful fabric and wool shops. Fadenwerk is the place to go if you want to disappear into a fabric store and never come out. Seriously, it’s huge. Fortunately, there is a cafe at the back, so if you’ve begun to suffer the signs of thirst and exhaustion from the labyrinth of shelves of fabric bolts, you can refuel and try to make your futile escape attempt.

It’s not just all fabric, patchwork, amazing accessories, sewing machines. Fadenwerk has a great wool, knitting needle and crochet hook selection. Lots of the usual brands are there, with great selections but I didn’t find anything that looked local or really grabbed my eye. That’s not unusual with ‘commercial’ yarns as I seem to have a magnetic attraction exclusively to variegated, hand-dyed subtle and not-so-subtle loveliness. Also for sock yarns, which is problematic as I still have yet to knit a pair of socks in my life!

If you’ve not spent your entire visit trapped in the plethora of fabrics, quilting cottons and everything else they have going at Fadenwerk, Wolle und Hobby is close to the central train station and is also a yarn shop of grotesque proportions. If you’re after something a bit more ‘luxury’, I didn’t get chance to visit but have heard good things about Woll Werkstatt. Their online catalogue looks good, especially the Jaipur Silk colourways. 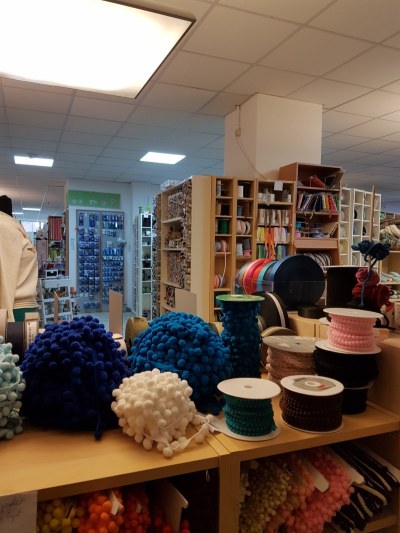 What if you hate fabric and are not into knitting? Well, there’s another little gem in Kiel devoted to handspinning, wood carving, ceramics… all things wonderful. They have a lot of different fibres and sheep breeds and I picked up some undyed Deichschafwolle while I was there. This is a Northern German sheep breed that usually lives on dykes. To cope with the constant fog and cold, they have pretty thick coats but I’m a bit surprised at how amazingly soft they are. The staple length is pretty impressive and just eyeballing it I’d say it’s almost comparable to Blue Faced Leicester. I’ll let you know how it spins when it stops being a fibre pet.

The store is full of wonderful spinning wheels, many of which are for sale and there is plenty of other interesting pieces too. Everything is handmade by the owner, including handturned wooden pens, spindles, the charming ceramic yarn bowls and some very beautiful hand-dyed fabrics. There are also knitted garments if you’re looking for gifts. It’s a little chaotic inside but I love that it’s so clear you’re stepping into the space of someone who is not just a master of (many!) crafts but who has a real love and appreciation for the process and just wants to share it with the world. I didn’t stay to chat much but I think if you’re wanting to learn something more about the local sheep or activities in the area, this would be the place to do it!

I like to get a bit of yarn of fabric as souvenirs when I visit somewhere, but as I had such a great trip to Kiel then it felt like it had to be something special and nice. I did manage to find some local sheep fluff but the next beautiful surprise was from local Kiel indie dyer, Kieler Woole. They are an online-only store but the photos are a good depiction of how charming the yarns are.

Apparently I seem to have gone a little mad for yak lately, and I think most of my last yarn purchases have had some yak content in them. I went for the standard yak base (15 % yak, 60 % wool, 20 % silk) in Marled Beauty, and the single yak (20 % yak 65 % wool, 15 % silk) in Cherry. The single yak is obviously a bit finer but either the blending or the colour really helps the shine of the silk to come through. The standard yak is also sumptuously soft and the nippy Kiel winds inspired me to start the Sockhead Slouch Hat with it. Pictures to come when I’ve made some more progress but it has been great to work with so far.

There’s even a bit of weaving around and some bigger shops out of the town. Wandering around the centre you’ll find a few more fabric places as well. For a place that is a not a metropolis, it’s impressive the variety and number of local things. If you ever do want to venture outside though, there are some interesting locations for the textile fiend less than an hour’s car ride away.

The first of these is the Hedeby Viking museum in Haithabu, further north of Kiel. It’s an impressive museum as the signposting and amount of care taken to curate this place probably merits quite a few awards. It’s one of the few places where it is very obvious that they have tried to take care as well as inject some creativity into room layouts to add some interest to the learning. As well as the replica longboat, there are some outdoor reconstructed houses that are part of the UNESCO World Heritage.

The museum focuses on the rather turbulent local history. Hedeby was a rather lively place to be between the 8th century until 1066 where it seemed to spend its time flipping between the control of various leaders until Harold Hardrada put an end to it all by razing the village. It was once though a significant trade centre owing to its geographical situation and you can see this in the plethora of precious gold artefacts and other pieces on display, including a small amount of weaponry.

Alongside some of the mundane tools of daily life were some collections of needles and spindles, many of which had beautifully decorated whorls. They are beautiful tools, essential for survival at the time, and the whorls were made from presumably whatever dense material was to hand, include soft soapstone and bone. Other tools of the textile trade are also dotted throughout the exhibits.

The Hedeby Viking museum is a museum that demands respect just for being so incredibly professional about being a museum. For English speakers, you can get a booklet which translates all the German signage into English (and is very easy to follow) and I recommend you do take a little time to not just gaze at the wonders but appreciate the hours of work that must have gone into each sign in terms of research and understanding.

If you’re in the region, another place not to miss is Schloss Gottorf, which like many great houses has been constructed through a mishmash of eras, starting around 1160. The inclement weather meant that I didn’t get to enjoy the beautiful gardens and grounds but there’s enough of the museum inside to keep you busy for a few days. We were chased out for closing time before we’d managed to stagger through all of the floors.

The newest wing of the castle is in the early Renaissance style and much of the building had to be done after a fire broke out in 1492, decimating large segments of it. It’s easy to see why it was the residence of choice for many of the Danish kings, and while it exists as a museum today, the architecture alone is worth savouring as much as any of the paintings on the walls.

While some of the art had me feeling a little like a Kunstbanause – a wonderful German word for ‘someone who does not appreciate art’, oft translated as ‘philistine’ – there are many, many textile delights amongst the displays. There are huge tapestries, laces from all over Europe, and my favourite, for being completely and utterly bizarre, is some weird, unexplained embroidery piece with these charming characters on it. I’m sorry the glass made it hard to get clean photos, but these are some of the charming characters that made up a completely ludicrous piece of textile art, all along a similar theme. 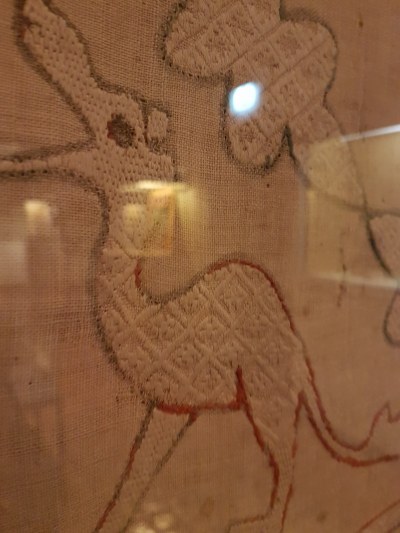 Schloss Gottorf is actually home to two museums, both for art and archaeology, which is probably why they are so expansive but is another place worth making the journey to see. The café has amazing nougat too – you have been warned.

Kiel is a city full of surprises. A captivating city on the sea with plenty nearby to explore and a seemingly thriving local craft scene.

7 thoughts on “The Wooly Haven of Kiel, Germany”