After a visit to Stonemountain & Daughters Fabrics, I headed towards the water and The Black Squirrel, a store promising yarn, fabric and excellent design. This was not the most logical way to do my trip (I should have headed to Lacis first as it’s less than a fifteen minute walk from Stonemountain) but I didn’t realise this until afterwards. Poor planning on my part! I was curious though to see exactly what The Black Squirrel was all about. 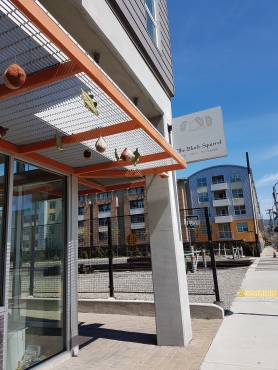 It’s a good 45-minute walk between the two stores although there are a few bus options that still have a little bit of a walk. If you’re feeling lazy the best choice is probably Uber, which is always a simple option for getting around California. 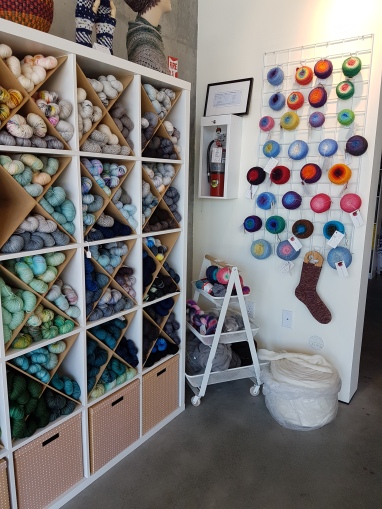 The Black Squirrel is in a bit of an odd location that feels entirely disconnected from the rest of Berkeley. Capitol Corridor station is a few minutes away and the whole area has the vibe of being a bit ‘industrial chic’. I think I’m not cool enough to understand why that was presumably the intention.

However, The Black Squirrel has some rather tasteful knitted decorations outside as nature substitutes and the concrete warehouse floors set the stage for snuggly walls of yarn. I’m normally very old fashioned when it comes to craft shops and prefer the ‘Grandma’s Attic’ (though perhaps Fengari takes that a little too far…) than the sleek, modern designer approach with one item per empty white table and a curated collection of tiny, expensive things that no one wants.

Pointlessly minimalist The Black Squirrel is not, but it does manage to pull off effortlessly cool incredibly well. It might be microscopic by American craft shop standards but the glass front and huge ceiling make it a lovely, airy space and there’s a really amazing selection of goodies that have been selected with quality in mind. It’s not a shop that tries to do everything but brings you the best of the things you really need. 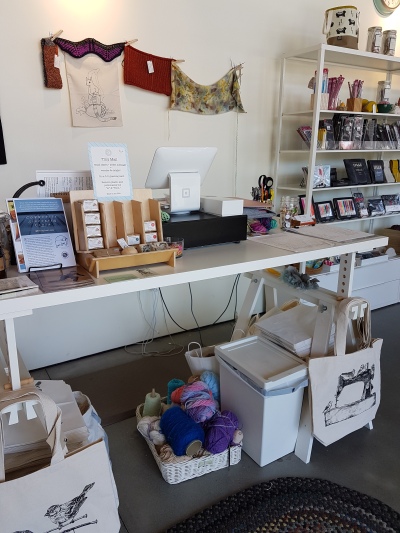 If you’re a fan of indie dyers, this is heaven too and the yarn wall is a work of art in itself. There are a few relatively local dyers if you’re like me and enjoy that for souvenir purposes and a wonderful, expansive colour selection. They have some store exclusive bases and colourways, so keep an eye on the website for those. I’d love to see some more laceweights, but there’s plenty of fingering weight and above with a great variety of bases. It’s so hard to find stores that carry more than a few token indie pieces so I’m really happy The Black Squirrel has decided to nearly exclusively devote to stocking them. I’m sure I could spend my life quite content not seeing another local yarn store that is stuffed full of Malabrigo Yarns, even if I do seem to have a magnetic attraction to their colourways!

Earl Grey tea is excellent tea and the Earl Grey Fibre Co. make yarns that are equally delicious. I think these are so local that they used to be dyed right across the road.

If you needed any more convincing that The Black Squirrel is a store with its heart in the right place, when I came in the owner was helping a customer troubleshoot her crochet and yarn with admirable patience. The shop has a nice, light space for classes and they run quite an impressive mixture of all things fibre, not just knitting and crochet! 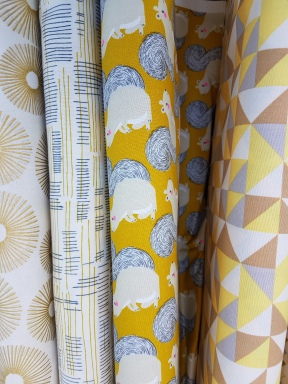 There’s a small collection of quilting-weight cottons that are all modern, clean prints. Not really my thing but again, it’s nice to see different patterns and colours that aren’t just the same styles produced by the big designers and sold the world over.

For a small shop, The Black Squirrel really excels on its needles and notions. Keep an eye out for the squirrel-themed fibre tools designed for the shop, including the disgustingly adorable design of a squirrel knitting. Even I could barely resist that. There’s a good game of ‘spot the squirrel’ around the store to be played while you’re there.

There’s some unusual Asian import threads and some larger tools for weavers and ball winders. If you need skeins wound in store that’s an option for not extra charge too. There is a selection of in-store patterns and books, but having opened in 2016 and being the hip, modern kid on the block, The Black Squirrel is also part of Ravelry’s in-store sales program. I haven’t used it myself, but given I like having a digital library and rarely print patterns, this is an awesome idea, particularly when you have a knitting expert to chat with live and guide you through the unfathomable depths of the Ravelry advanced search feature.

The place has a real charm and is somewhere for fibre people, by fibre people. The original aim of the store, which was crowdfunded to get it going, was to try and support small, local designers and dyers and to make a supportive space to encourage people to keep crafting. A bit like another new kid on the block, Make at 140, A Black Squirrel does feel like it is trying to go beyond just being a place that sells stuff and create a ‘drop-in’ space to get the crafting community together. I really hope both cases and both business models end up being successful, not just because it’s a concept I’d love to see more of, but also because both of the owners are such lovely, vibrant people it’d be criminal not to give them the chance to share the love around even more.

Although most of what I’ve covered in this blog have been positive experiences of various crafting workshops, I have been to a few in the past (and two of which were at places that are both now closed, so I expect I wasn’t the only one…) that have been, phrased in the most British way, less than stellar. A lot of crafting organisations and guilds, seem to attract drama and unpleasantness, even to the scale where it makes BBC news… I’m glad to see spaces trying to counteract that so that everyone has the chance to have fun with fibre.

3 thoughts on “The Black Squirrel, Berkeley”