What’s this? Some gold threads sighted somewhere near a goldwork project? Wow! Today marks update number three on the monstrous goldwork monogram project. I promised to try and keep you all updated semi-regularly on this one and as part of that I’ve been trying to fit in around one lesson a month to keep things rolling. It’s slow, but I have a few little pieces and lessons to share with you! 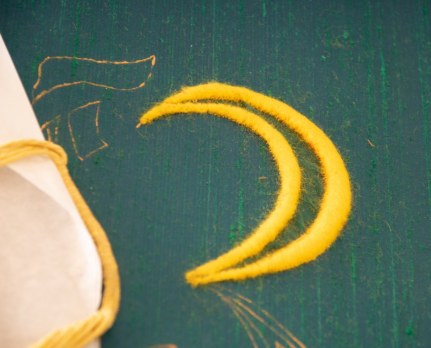 At the end of the last post I had some unpicking to do for the felt padding and needed to re-lay some parts of it to get a smoother finish. I also still had the inside of the shape to get a few layers on. I’ll spare you endless photos of layer on layer going on but I’m pleased to say these are both now done and ready for some shiny things!

Working around the organza has added a level of trepidation that felt padding doesn’t really need but it has mostly been well-behaved. It is an excellent magnet, as is the silk dupion, for all the felt fluff that gets produced when manipulating and stabbing the felt but the organza has mostly remained intact. For now at least. 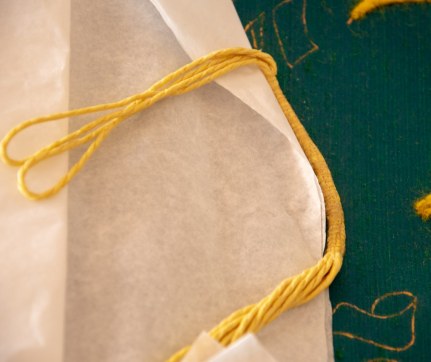 If you’ve never tried soft string padding, the idea is to coat the strings all together in enough beeswax that they form a single sticky lump, without being twisted. This consumes a horrendous amount of beeswax and is prep work you want to do well away from your frame so you don’t end up with lumps of wax that could potentially stain everywhere. However, I’ve found that, even in a few days, the wax dries enough that the threads start to develop ‘lives of their own’ rather than being a collective lump.

My teacher’s sagely wisdom as soft string padding is incredibly time consuming and I don’t tend to get long stitching sessions was to roughly couch it down in a single go, so at least everything is down together and then refine the stitching as and when. The section I have down will need some rewaxing and I’m just going to have to hope for the best in terms of protecting the fabric but I will bear this in mind when I find the mental fortitude to start the next section or two of the padding.

The good news is that, when the next bits of soft string padding are done, then I will be done with all the planned prep work for now. There’s a few sections of the design that are still ‘under discussion’ and may change between now and the time the stitches are actually in the fabric but we’ll see. 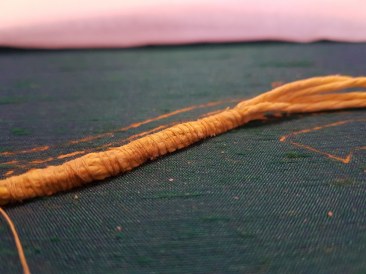 The end of padding means time for the metallic threads! I’ve surprised myself a bit with this project. I don’t quite like the restrictive timescales around the soft string padding but I feel that I’d quite happily sew layer upon layer of felt padding for days. It’s tactile, mindless and looks awesome when it’s done. I hope it will look more awesome with some metal on it though!

Before I start putting the gold on the main piece though, time for some sampling and practicing some of the techniques before they hit the main frame. What I’ve started with here is a combination of Japanese T69 and Japanese K1, both from The Golden Hinde. It’s subtle but the T69 has an interesting texture to just add a little variety along the way. 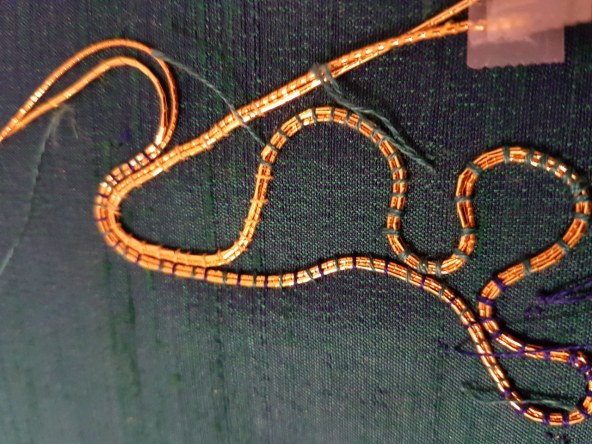 I started my couching with the traditional goldwork thread which I always feel fills me with a resounding feeling of ‘meh’. I don’t think it ever looks invisible enough to not be noticeable but at the same time is always this bland colour that never makes me want to jump up and down with excitement.

Instead, I tried couching with some DMC floss, starting with Green 3847 1 strand and then 2 strands and then the Blue 796 with 2 strands. For me, it’s amazing how much better the green seems (at leat the single strand) seems to blend it and not detract from the gold. I did originally like the double strands but looking at the photographs they feel a bit heavy…

Of course I had to get a little silly and try some couching in alternating colours. I really love this – I’m not sure it’ll make it to this piece but I am definitely envisioning some silly candystripe style monograms ahead!

So, lots of stitching, not a lot to show for it but time to get my head down in the goldwork books for inspiration and steel myself for the soft string marathon ahead!