Appenzell is an interesting place. It gives its name to a very unique, local style of whitework embroidery and at the heart of the village is a very special place called the Landsgemeindeplatz. In most villages, this would simply be the central, and maybe commercial, hub of the place but in Appenzell the Landsgemeindeplatz is the democratic home of the canton.

Switzerland is often considered one of the ‘most democratic’ countries due to a combination of frequent referendums and a devolution of power to the cantonal level. The president of the Confederation also only holds term for a year, which a duty exchanged between the seven cabinet members. In many respects, the president does not really have any special powers but is considered the ‘first among equals’ and the president actually retains their original cabinet role alongside the presidency.

But in two cantons, Appenzell Innerrhoden and Glaurus, as well as the usual, regular referendums, the tradition of the Landsgemeinde remains. This is a system of open-air, public voting by raised hands. While this used to be standard practice in Switzerland, the majority of cantons have converted to voting by secret ballot, apart from the remaining two. How much longer it will remain for seems unclear, voter turnout is typically 10-15 % less than ballot votes, and there are many obvious criticisms to this approach but there is a strong sense of nostalgia and tradition with the practice that others are keen to preserve.

Appenzell village seems to be built on a similar sense of historical duty. Appenzell is a popular tourist spot for the surrounding nature and rolling hills, a very different geography to the rest of Switzerland and its well-preserved painted houses. In a country where there are typically local laws stipulating which colours a house exterior must be painted, Appenzell feels positively flamboyant with pinks, greens and oranges all side by side.

Strolling around it’s easy to see why what should be a quaint little village is such an iconic tourist attraction. There are plenty of excellent cafes and restaurants too, particularly if you’re eager to try some Swiss-German classics such as Apfelküchlein­­, or one of my personal favourites, Älpermagronen, lavished in apple sauce. If you’re keen to learn a little more of the history and tradition in the local area, the tourist office is the place to go, as it is not just home to the local tour guide but also the Museum Appenzell, a local museum home to some embroidery that might make the V&A green with envy. 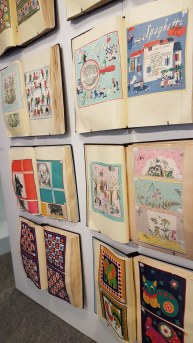 The Museum Appenzell has both an extraordinary permanent collection (with a lot of local costumes and embroidery) as well as regularly changing exhibitions. When we went, we were lucky enough that it was on handkerchiefs of all things. You might wonder how can you make an interesting exhibit on local handkerchiefs but given Appenzell’s prominence in the historical lace and textiles trade, and some very inspired curators with a flair for creative display tactics, you have a recipe for a visually stunning and highly informative afternoon.

Particular favourites of mine were the idea to create a windmill/fan type shape from different, brightly coloured pieces as well as to display the handkerchiefs in large oversized hardback books with different display areas. Part of the exhibition was to show the evolution of the local industry, as until 40 years ago, this was still very big business in the area. Despite the high prices, hand embroidered handkerchiefs were still being made until the 1970s, with a special areas of the exhibit dedicated to them, and you can also see some of machine embroidered ones that would have been created on the famous embroidery machines that can also be seen in St. Gallen and in another local museum. 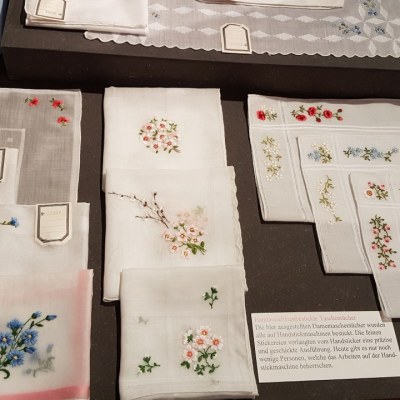 Many of the items are also fabric samples and sample books showing some of the amazing lace designs that could be bought for edging and some really beautiful, stunningly coloured plaids. I was really quite taken with these! The colour makes them look incredibly fresh and I don’t know if they had been very carefully stored or looked after, but they don’t seem to have faded at all.

There are some display cabinets with the ‘tools of trade’, from DMC and silk cottons to some very serious looking tailor’s scissors. I don’t know how heavy they are but they certainly look like they would slice and dice fabric without thinking too hard about it. Although I loved all the floral motifs on the handkerchiefs, some of my personal favourites were the monogrammed pieces. I have a soft spot for embroidered monograms anyway but there are some really unusual designs and a couple of pieces where you can see the influence of the local whitework the area is famous for, with these pale, blue-tinged threads. 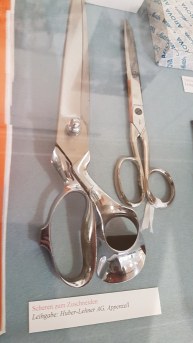 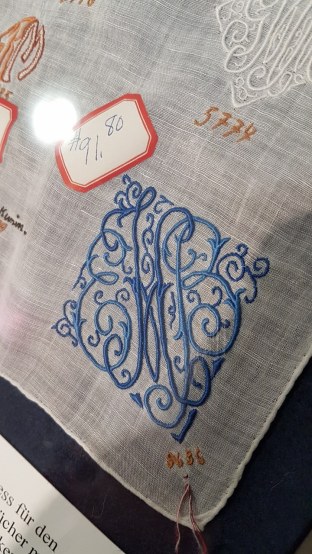 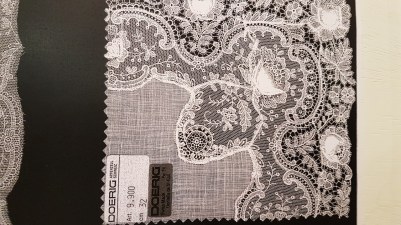 Alongside the exhibition the museum has a permanent collection designed to introduce the visitor to local Appenzell culture. Like many folk museums, the collection is a big mish mash of anything local, including plenty of paintings of the Poya, where the farmers would lead the cattle into the mountains, still a living tradition in Switzerland, and a recreation of a famous copperworkers studio. There are also lots of local furniture, religious artefacts and a few Ancient Egyptian pieces that I think are a staple in any Swiss museum. 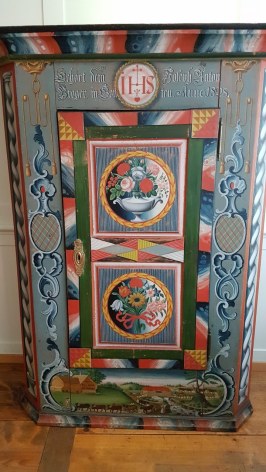 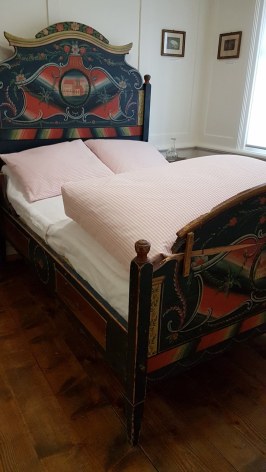 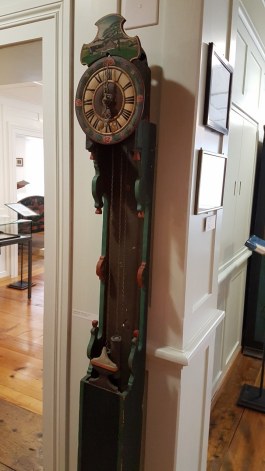 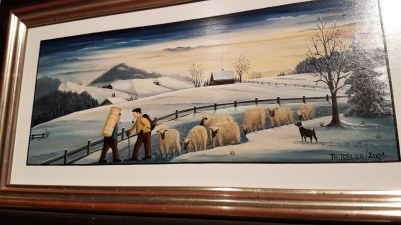 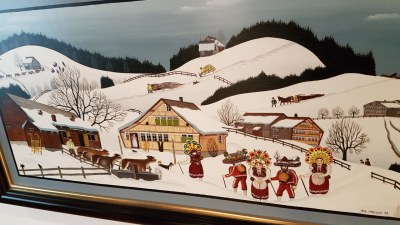 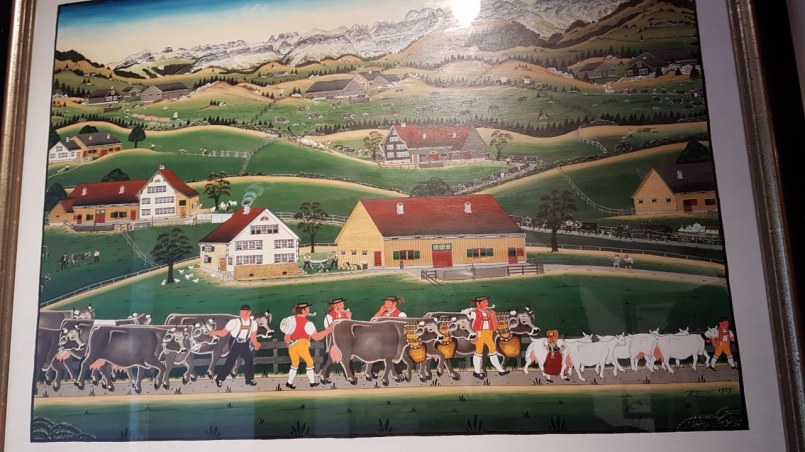 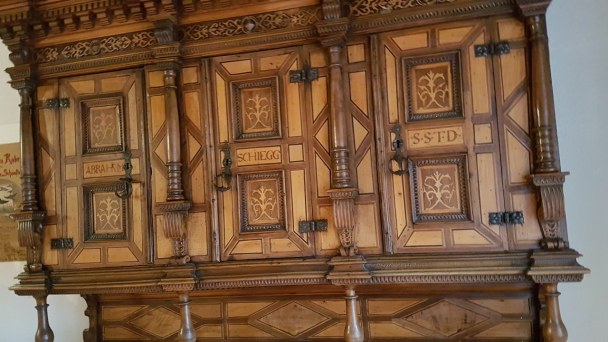 However, at the top of the museum is where the real treasure trove lies. Appenzell is known for being a region with a particularly elaborate traditional dress, and there is still a great deal of effort to keep this tradition alive. If you wander around many of the shops in the town, you’ll see plenty of stores selling the waistcoats and dresses that either made the daily workwear of the local people or the more formal dresses with the incredibly impressive gold-embroidered Brüechli (bibs) and silver lacing. 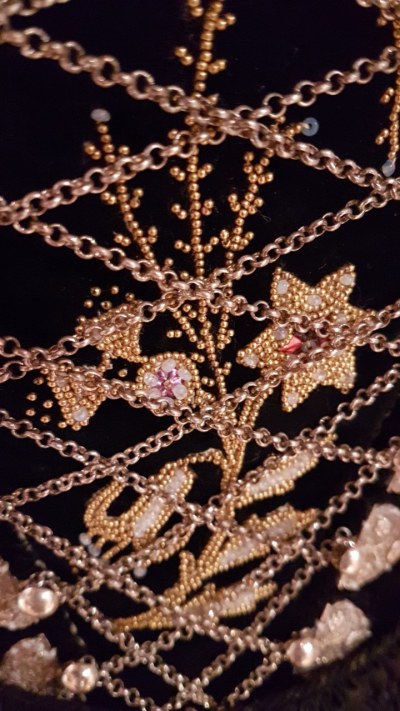 There’s a video in one part of the museum how they create the ankle length pleated skirts that are part of the formal dress. I have to admit when I first saw these skirts, while they are very lovely, I didn’t think they were quite the spectacle of craftsmanship that they are but when you see how each fold must be painstakingly glued by hand and stretched and smoothed then it does bring a whole new level of appreciation.

As well as the costumes, the museum has an internationally famous embroidery collection which had me lost for words. In the early 1900s, a third of the working population were employed in the textile industry, with finely embroidered pieces being created for the international market. Appenzeller Handstickerei is something to behold. It is worked on a frame with a belt for tightening (similar to a standing ring frame) usually on white fabric with white or blue threads, typically 50 – 70 weight. It has both elements of pulled whitework, ground stitches and satin-type stitches.

Particularly beautiful are these ‘woven wheels’ that you can find in the design, where a round circle is cut from the fabric and a design is laced together in the remaining space. 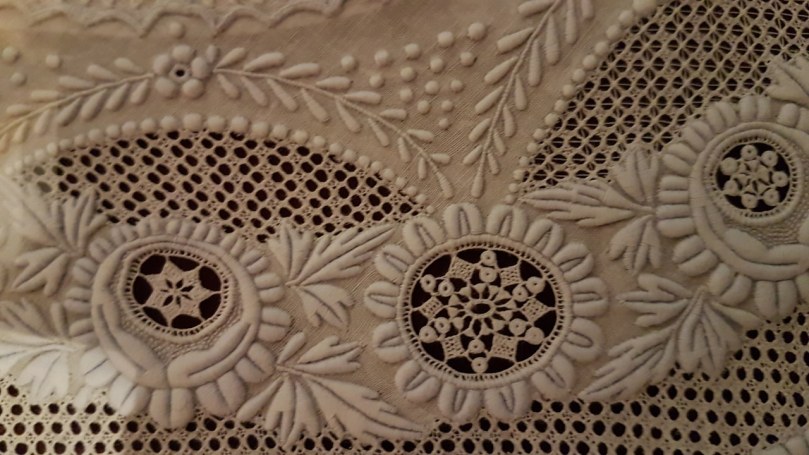 It is something of a dying art as it has been largely passed on between local families and I have heard that people are perhaps not too keen to teach ‘outsiders’ – which is anyone who has grown up not in that canton. There is one lady teaching courses, that you can find more information on here, but I think that’s about it. I’m not an expert on whitework so I’m not sure how similar some of it is to other traditions that would transfer over well. I have one book (in German) by Josef Inauen with some technical information but, again, this is another traditional that has largely been passed down from person to person, rather than by written instruction. 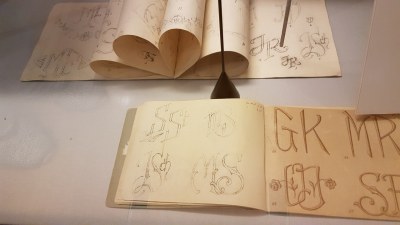 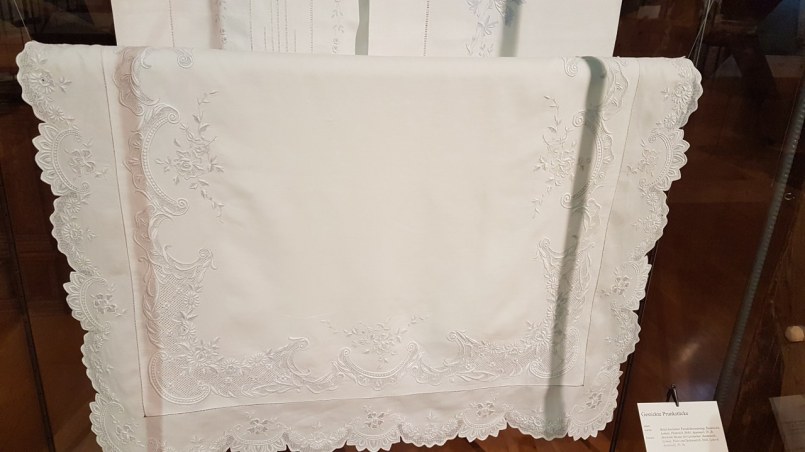 It is wonderfully beautiful, fine detailed work and you can see how it became prohibitively expensive to sell. There are local stores which carry some small pieces for around 100 CHF, which I think is very reasonable for the work it takes. Access to the museum though is much cheaper than that and you can feast your eyes on a huge number of really high-quality works. A lot of the signs are in German but that won’t stop you gazing longingly at the textiles. 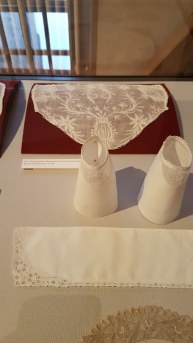