When I heard there was going to be a special exhibition on orchids at Kew Gardens, I knew this was an exhibition I would happily make an effort to see. For those of you not familiar with Kew, it is a UNESCO World Heritage site home to over 50 000 plants and has one of the most diverse plant collections in the world. For the embroiderers, it is a beautiful botanical garden situated nearby Hampton Court palace if you want to sneak some stitching! 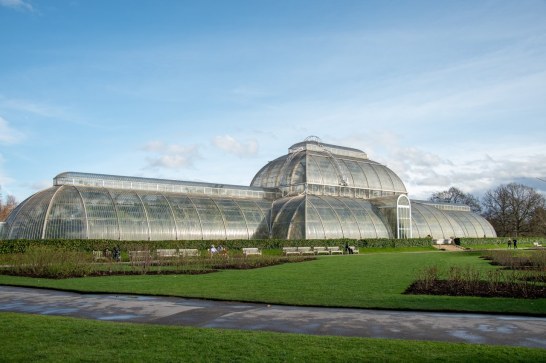 I was somewhat sceptical that now was the optimal time of year to visit the gardens. The day started with rather suboptimal weather with plenty of lashings of rain and wind but it did improve. Kew might not be draped in colourful finery at this time of year but there are a number of indoor exhibitions that can still be enjoyed, including botanical art displays and the indoor greenhouses, where I had great fun battling the fogging of my camera lenses! 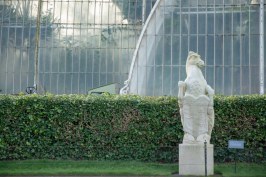 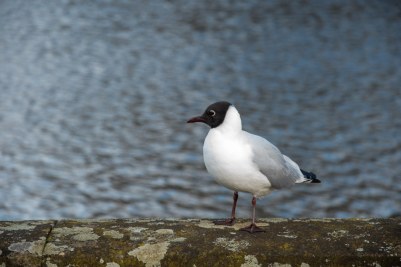 Kew’s grounds are beautiful rain or shine. The incoming spring weather meant the magnolias were just starting to peek out of their buds and large sections of the grass were overrun with daffodils and crocuses. I guess Kew must be under one of the flight paths from Heathrow as the peace and tranquillity is frequently punctuated by the roar of overhead aircraft! 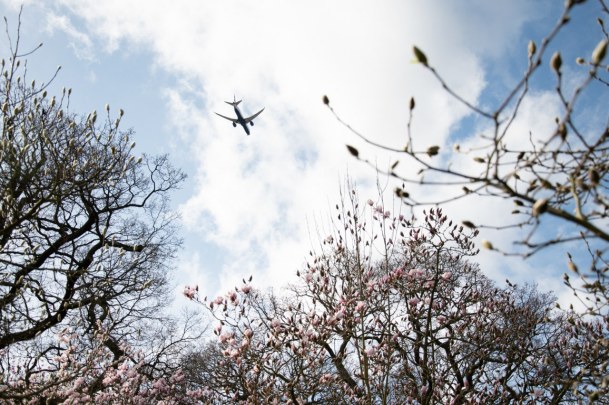 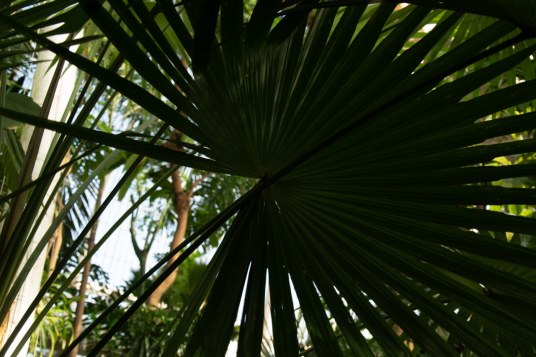 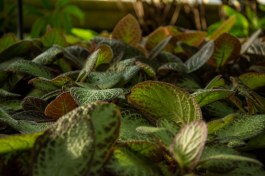 After squelching through bits of the gardens and greenhouses, we arrived at the Princess of Wales conservatory where the Orchids exhibition was being held. This is apparently a yearly extravaganza and this year the theme was Indonesia. Orchids grow in the wild in mostly tropical environments, with South America and South East Asia being common spots. However, they can also be found in more moderate climes, with nine types of wild orchid that can be found in the UK. 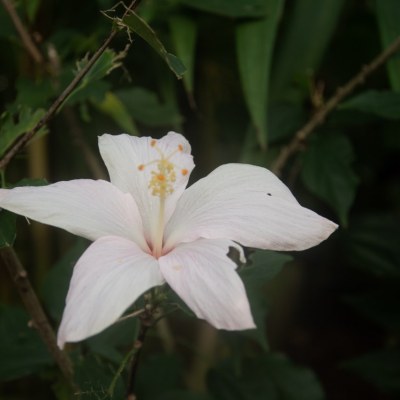 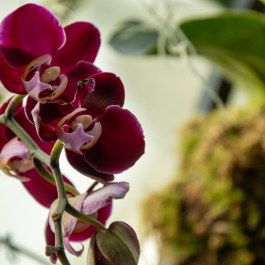 The highlights of the exhibition were some rare Indonesian orchids and the general variety of plants on display. Orchids are one of the most diverse plant families and it is a joy to see all the different shapes and shades they come in. However, overall, the Kew Garden’s exhibition was an incredibly odd one to say the least. Kew is a place that really appreciates plants, not just as flashy, decorative pieces but as subjects of serious scientific study. They have an impressive number of PhD scholarships available each year and are leading numerous projects on biodiversity, conversation and all things plants. Perhaps because of that I was expecting a niche, specialised exhibition, heavy on the educational content and attempt to recreate something akin to the plants’ native habitats. Instead Orchids looked more like it had been carefully curated as an Instagram photoshoot background.

I love colourful plants and excesses of them, but some of the displays felt very contrived. It probably didn’t help that the layout and route through the exhibition was a complete mess and it was impossible to know which section was supposed to lead where. Combined with the impressive crowds there to see the displays, this made for a nightmarish obstacle course of visitors. Given the aforementioned inclement weather, the majority of visitors did seem to be huddled either here or at one of the many cafes around. 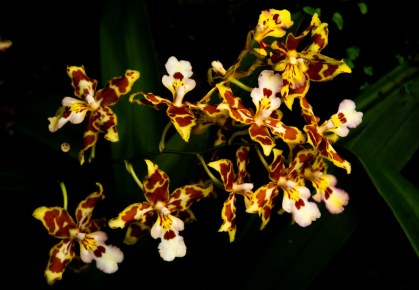 Overall though, these are minor gripes and you’d have to do something very wrong to make an exhibition of such beautiful plants unenjoyable. Other highlights included the underwater section where one could see fish lurking in the waters. The plants are a delight and there are some sculptures and decorative features dispersed through the exhibition. The exhibition is still running until 15th March 2020 so you still have time to catch the show! I would make sure you book though – entrance the exhibition is free but you need to have a booked timeslot and they were going very rapidly! 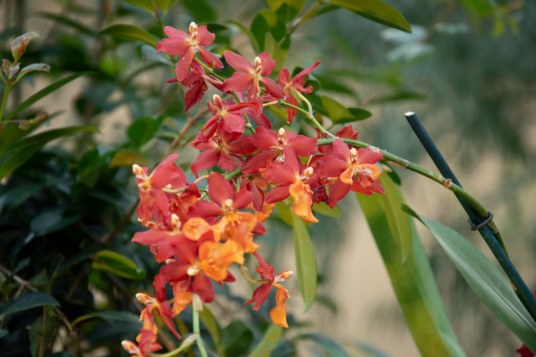 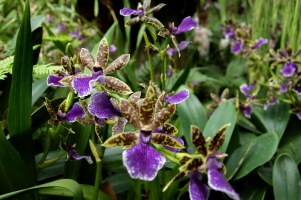 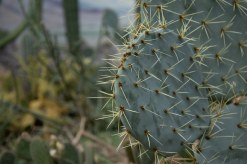 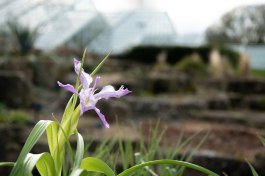 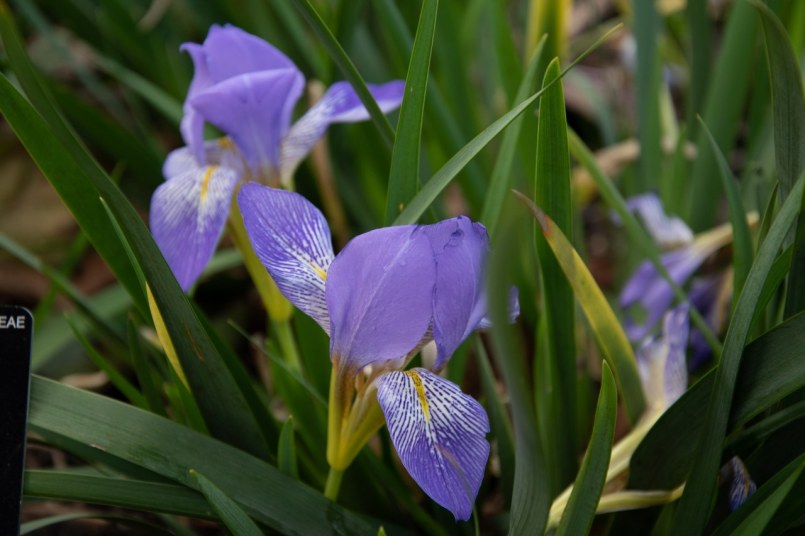 Keep your eyes peeled while walking through the gardens and you might catch a glimpse of some of London’s parakeet population or run into some rather glamorous peacocks strutting around. The alpine garden for me was one of the must-sees – a mixture of weird and wonderful plant life with odd textures and dainty, delicate flowers, often in beautiful shades of blue. I think I have enough reference material now for a lifetime of silk shading! 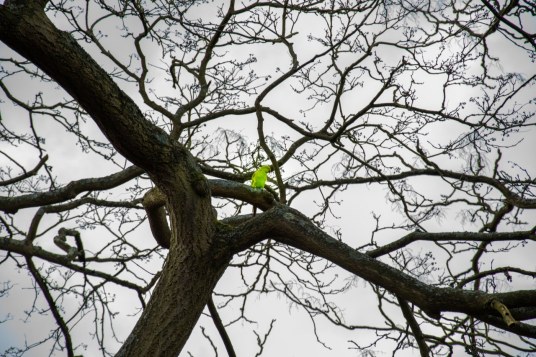 7 thoughts on “Kew Gardens and Orchids”