I’d originally had 50 g of the merino fibre and blended in around 5 g of silk in total. However, the final piece weighed in at around 48 g at approximately 186 m. I did end up producing lots of lovely fluff waste that I’m going to have to find something else to stuff with… It’s always a dilemma when preparing fibre, being ruthless about slubs and imperfections makes for the cleanest, smoothest yarns but particularly on hackles, I find you do end up with quite a bit of waste.

I mentioned before that I was looking for something a bit ‘moodier’ than the original colours of the merino portrayed and the choice of silks I used did damp down the colours very well. I do very much like the zingy yellow-green in the merino, which ended up very muted after blending, but I loved the gorgeous sea greens that came out from a combination of the murky green silk and teal merino. 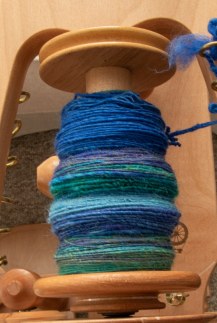 It was tricky not to make colour mush and keep the colour pattern but I had decided on a 2-ply as there wasn’t really enough material to do anything else with and I didn’t fancy trying to use singles. I didn’t want something where the plied colours were too brash with each other either. I can’t decide if I love strikingly stripy handspun yarn or not. It screams ‘I’m handspun’ at you but I also find it can look jarring and bitty. 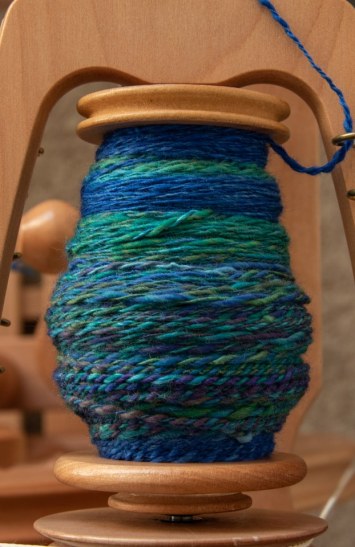 Despite not putting a huge deal of care into being exacting about the lengths of the different colour sections, and at one point manging to run one the wrong way around, I’m really happy with the way the colours combined and complemented rather than working against each other in the final yarn. In some places, they line up perfectly and the only disappointment were a few muddy, heathery parts where the purple sections had contaminated others. I don’t know why but I was beleaguered by purple fluff throughout preparing the fibre that just seemed to want to go everywhere. All the other colours stayed in place nicely… 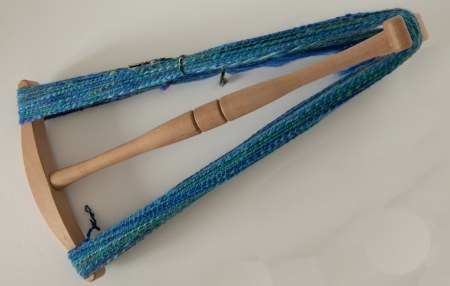 Spinning regular, controlled yarns is something that benefits from organisation. I remember seeing a brilliant spinner preparing some fleece, taking tiny tuft by tiny tuft, lining them all up in bags, before spinning the most beautiful bouncy woollen magic from them. I am trying to get better at this, in particular paying more attention to predrafting because it just makes the spinning process so much easier but I think I am a long way off the serene world of orderly control.

What I have got into the habit of doing through is spinning a quick ‘sample’ so I have a reference for what thickness to go for with the singles as, while I find a sizing wool helpful, particularly for thinner yarns, it’s hard to be extremely accurate with it. What I did want to do with this one though is spin it as worsted as possible, to bring out as much shine as possible and make it tough for use in weaving, but to give it a bit of life I wanted to over twist and ply some sections. 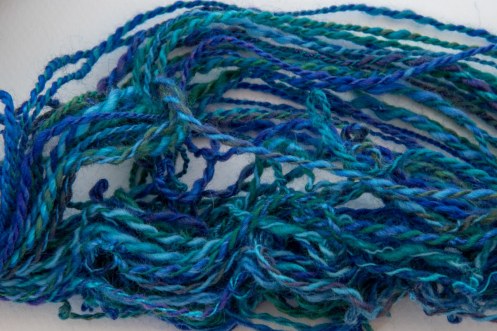 It worked wonderfully well. There’s a little more variation in the thickness than I would have liked, which could have been avoided by taking more time and care with my fibre prep but love the changes between a standard two-ply and something that has very much a mind of its own. This is a yarn that doesn’t photograph well in the sense that it has this fantastic movement and bounce to it and rather reminds me of a rumbustious octopus darting around. It’s coarser to touch than I was expecting. I’m not sure if that was because the merino was not the finest and fluffiest in the first place or the way it has been spun but it won’t matter for its future as a weaving yarn. I have a sample on the rigid heddle loom that needs some experimenting with that it might end up in, as apparently only boring people get bored with plain weave… I’m trying to learn to love it!

This was a lovely project, small, simple and a lot of fun. I can’t wait to get back on the wheel again, I’m just torn as to what to do next. I can justify doing art yarns now for weaving… and I am tempted to try some spiral yarns. I love core spinning and do want to get to the stage where I can make acceptable silk gimp for embroidering. However, now I’m back with the beloved Traveller, I’m tempted to challenge myself with spinning very fine, even silk that I could never enjoy on the Mystery Wheel… I’d also like to get more confident spinning singles! What to do next is truly the best kind of dilemma and if anyone would like to add to it with suggestions in the comments box, please do! 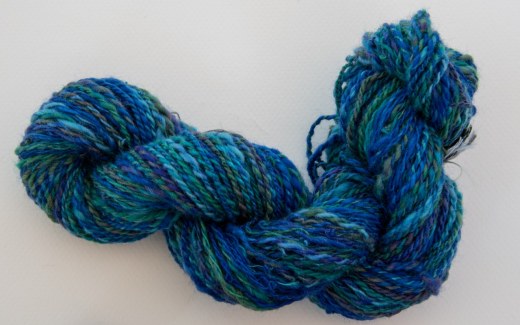 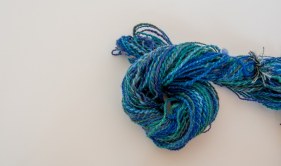