Sorry again for the slightly sporadic posting… It’s not that there haven’t been lots of things to say, I’ve still been finding a bit of time to squeeze into a few projects, but finding enough of a pause to sit down and write something sufficiently composed that it wouldn’t sound like fevered gibberish or a laundry list of swear words has been slightly more difficult. 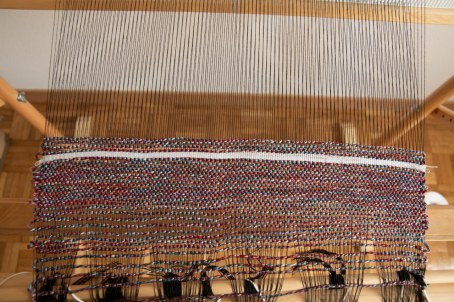 I think one of the nicest compliments I’ve ever received was someone telling me that a full and fascinating life. While I don’t know how true that is, I do tend to be ‘busy’. As you can probably guess from the blog, there is an endless list of things out there I find utterly enthralling, and combined with a job that takes a lot of hours and my life, I end up being pretty ‘busy’. Normally this is all good and fine, but sometimes when there are deadlines coming up or some magical project or problem appears out of thin air and there isn’t much to be done other than dig in and spend some time on it, things start to get very quickly out of equilibrium.

It’s interesting because, as my typical working week is already a bit on the long side, adding a few extra hours on top can soon start to drag. There’s a really interesting study on the actual hours people work versus their perception of hours worked, and while people are relatively accurate at guessing their working hours up to about 40 hours a week, past that the gap between reality and perception starts to widen quite dramatically. I can understand – at some point, even with rigid scheduling it starts to become very difficult to have much of life outside of work other than stumbling through the essentials, even with the most rigid of schedules.

While I think there’s a good point to it, the whole thing is making me a bit grumpy and generally feeling a bit frazzled, like the poor warp on my weaving sampler. This is the first direct warp on my rigid heddle loom and it’s becoming obvious that I didn’t quite put it on as straight as I could have. In retrospect I see exactly why I’ve had this problem but it doesn’t make it less annoying now! It’s a sampler though, so I have to not be too self-critical on this one.

Challenge number one was just plain weave, plain weave and more plain weave. The warp threads and some of the weft sections are Handweavers Studio’s lovely 2/16 mercerised cotton. As it is single threads in a 12-dent reed the set is much looser than it would need to be for a balanced weave but we’ll see how the drape of the cotton turns out. The warp-faced effect works incredibly well for the recycled string sections!

I’m getting more used to handling the loom but I’m still struggling to beat straight (probably not helped by the fact that the sett means everything is a touch on the slippery and lively side). The other challenge was trying to focus on getting good selvages for a nice, tidy fabric. Not completely trivial! 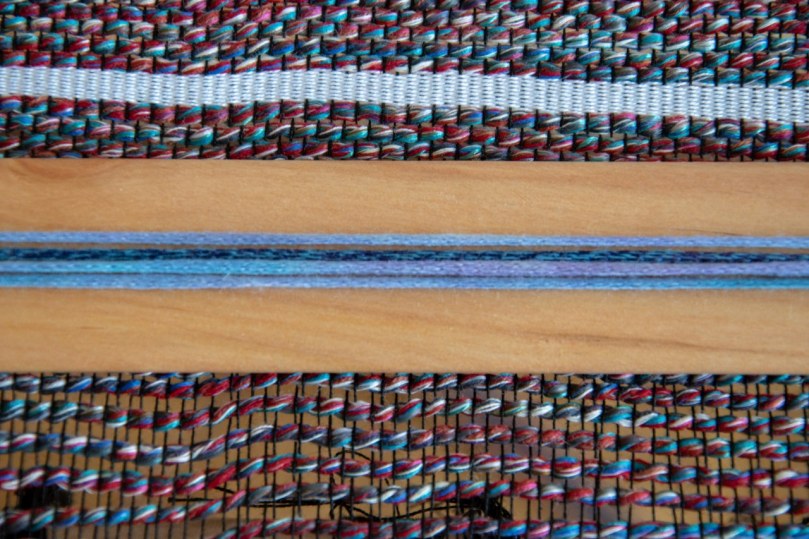 The other interesting yarn addition was a knitting ribbon from Manor from their own brand. Their online collection is absolutely rubbish but most of their stores seem to have a good collection. It’s a 52 % wool, 48 % polyamide mix and I don’t know why this stuff is called knitting ribbon. It’s not at all my thing knitted but woven it looks awesome. While the variegation is a bit blocky for this width of fabric, I love the colours and the small, shiny segments mixed in there too. Who said plain weave couldn’t be exciting?

As you can probably guess from my love of lace crochet and fiddly embroidery, I do like intricate projects, so after getting into the swing of things with the knitting ribbon, it was back to rows and rows of plain weave with the 2/16 which is much less forgiving to work with. Mistakes show up rather well and it’s not the easiest thing to keep the tension good on!

The remaining awkwardness with the loom is leaving me partly wondering why I didn’t just buy a shaft loom from time to time but then I see the work of people like Lisa Rayner over at Weaving with Cats and realise the problem is very much the weaver and not the loom! My next plan is to do some work with colour and pick up techniques and see if I can start enjoying the potential of the rigid heddle some more!

We’ll see when I get chance to implement some of these ideas as there’s plenty of work-related travel up ahead but that doesn’t stop me thinking and planning or trying to find some snatches of time to play with some thread and feel a bit more human.